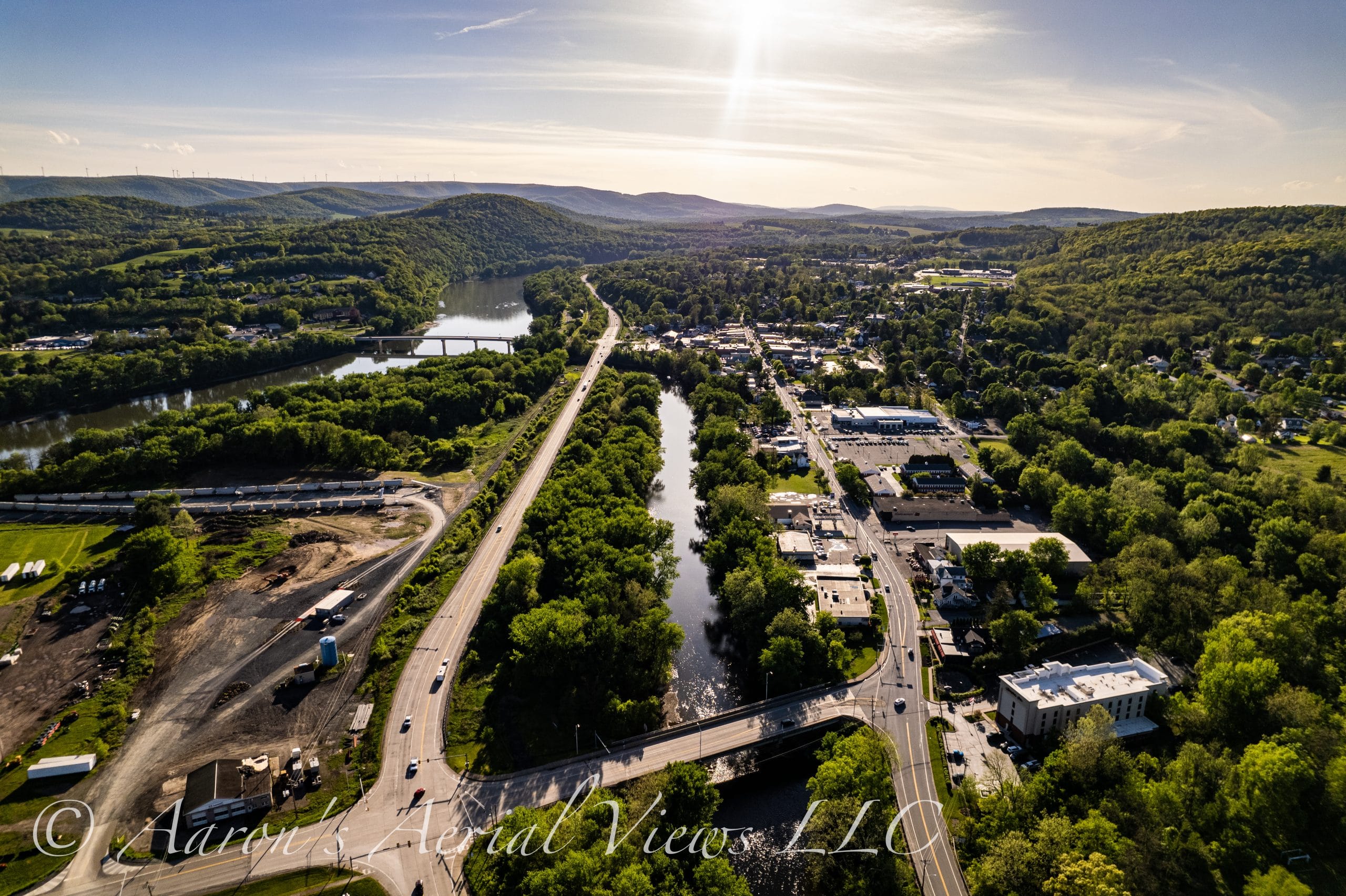 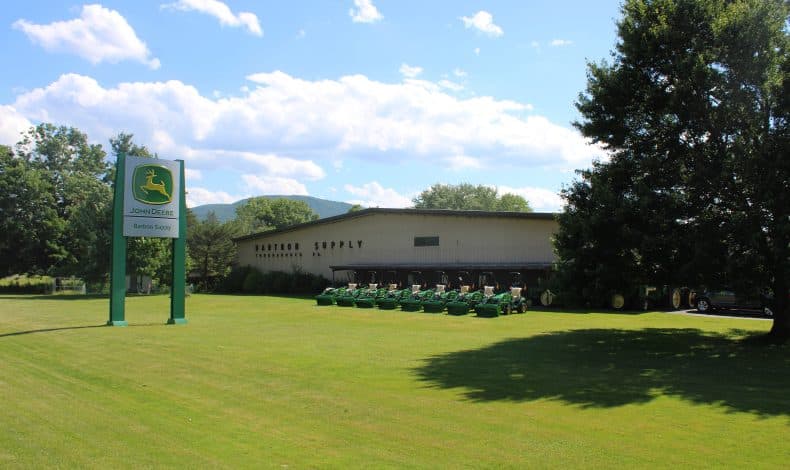 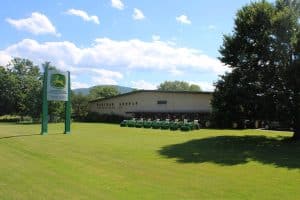 Family, farmers, and friends are the foundation on which Stark & Jennie Bartron built Bartron Supply. Founded in 1948, the business sought to support the local farming community. Stark Sr. was fond of a particular green tractor on his farm – the John Deere. With high hopes, Stark Sr. asked Jennie to write a letter to John Deere expressing his interest in a dealership. The letter was approved, and Bartron Supply became the first John Deere Dealer in Northeast Pennsylvania.

Over the years, the Bartron family and the business grew. They expanded their product lines to include Husqvarna, Honda power equipment, and Bobcat’s compact construction equipment line. Bartron Supply became a staple name to the people of Wyoming County, from farmers to operators to homeowners. In 1980, Stark Sr. stepped down as CEO as they welcomed his son, Stark Bartron II, as the company’s new owner. And in 2014, after almost 35 years, Stark II handed down the business to his son, Stark Bartron III, and daughter, Bekah Frisco. And under this new duo, Bartron Supply saw growth unlike ever before.

In 2018, Bobcat approached the Bartron family with an opportunity for expansion. Having found great success in Tunkhannock with Bobcat’s equipment line, they knew this was the next step in growing with the company. By June 2019, they had opened their first extension, Bobcat of Binghamton, in Binghamton, New York. Continuing their expansion, they set their eyes on Honesdale, opening store number three in March of 2020 – Bobcat of Wayne County. And this fall, Bobcat of Wayne County will be moving into its brand-new dealership, currently under construction in Waymart.

The journey to today was not always easy. In 1977, a devastating fire tore through the original building. Far from repair, the Bartron’s decided to rebuild, opening the new store less than a year later just across the road. And in 2011, crisis struck again in the form of a flood, leaving Bartron Supply’s showroom under 3-feet of rushing water. Damaged but not destroyed, they cleared the old showroom and added the now-standing 10,000 ft showroom onto the old building. The employees set up temporary trailers to keep the farmers, businesses, and residents up and running during construction. Through all this misfortune, the Bartron family remained resilient. They have a legacy to protect and will keep moving forward. 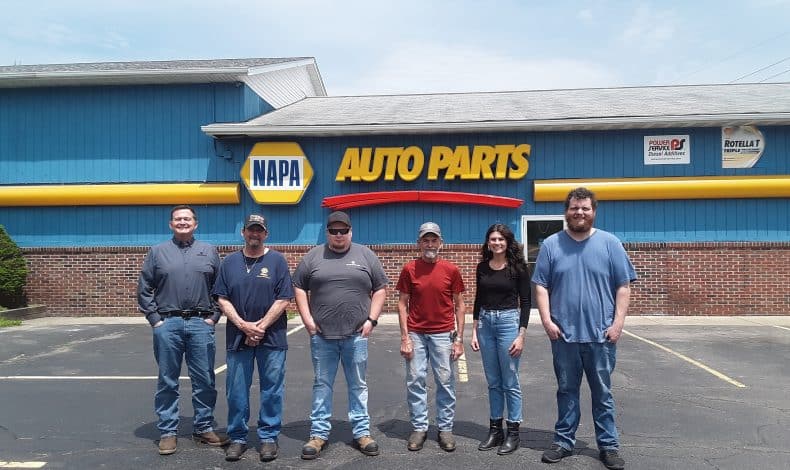 In 1977, Tom Henry of Tunkhannock decided to build and operate a tire shop on Route 6 just west of town. Before he finished construction of the building, some friends convinced him that what the area really needed was a new auto parts store. With $35,000 in inventory and one employee besides himself, Mile Hill Auto Parts opened to the public and has been at the same location for 45 years.

The Henry’s property stretched to the river and, in the 1980s, a community ballpark opened bearing the NAPA name, the national auto parts supplier with whom Mile Hill has had a successful licensing agreement since the start. Tom built a two story addition in the 1990s as the business continued to grow. When the Tunkhannock bypass was constructed on the south side of town along the river, the property was split, but the ball field and the store remained intact. “It’s sort of an icon,” said Chris Henry, who purchased the business from his uncle in 2021 and officially took ownership on Sept. 1. “It grew in leaps and bounds and it’s been on a fairly steady trajectory ever since.”

Chris moved with his parents, Earl and Shirley Warner Henry, to Florida in the 1960s. Though he remained in the Sunshine State after finishing his education and starting to build his experience in retail sales, he enjoyed trips back to Pennsylvania. “I’ve always wanted to move here,” Chris related. “Even though it wasn’t officially home, it always felt like home.” Chris married Allison Hnatko, whose family was from the Lake Winola area.

With four full-time and two part-time employees, Chris embarked on an expansion of the product lines and the retail side of the business, including Milwaukee auto tools, which have proven popular with customers. He has also enhanced his towing section and the store’s hydraulics line. “We’ve invested in larger-capacity equipment to make bigger hoses because we believe the demand is there,” Chris stated, adding that the need for larger hoses is driven by the natural gas industry, which he had in mind when he added more heavy duty parts for repairing trucks, skids steers, back hoes and the like.

Having sold various commodities over the years, including real estate, Frito Lay products and wholesale groceries for a large Florida-based chain, Chris has seen many sides of the purchasing public and how tastes and expectations are constantly evolving.

He credits the continuing appeal of Mile Hill Auto Parts to both high-quality merchandise and the personality and professionalism that staff members present to the public. “I think it’s still important to the majority of people to patronize a locally owned business,” said Chris. “If somebody’s got a problem with an older vehicle or tractor, they come here.” But not as many people are restoring older vehicles, and there are fewer farmers to serve. The non-DIYers, as he calls them, and many female customers go to the competition in part, he suggested, because they are more visually appealing. Chris feels that a methodical make-over of the store will attract some new customers who will, in turn, experience Mile Hill’s unique brand of customer service.

He installed new lighting in the store and reconfigured the sales space with the addition of more shelving, all of which he considers image boosters.

Chris also hired Melissa Stonier of Tunkhannock to serve as Mile Hill Auto Parts’ first customer relations manager, focusing on both in-store sales and wholesale selling to auto repair shops in the area. Melissa is a popular server at the Tunkhannock Moose Lodge who was out of the work force for several years to have a child. Melissa said that she is enjoying putting her people skills to use as she meets more people in the community and works to meet their auto service needs. “I think there’s a real opportunity for growth for her,” Chris stated. “I feel that she’s gown a lot professionally already in the time that she’s been here.

The staff continues to be a mix of family and family friends and includes Tim Henry, Seth Johnston, and Robert Drobish. While Tom has officially retired, he stops by the store almost daily and still likes to mow the grounds.

Mile Hill Auto Parts has an active Facebook page on which users can find out the latest product additions and bargains. The store is open from 7 am to 5:30 on weekdays and 7 am to 1:30 pm on Saturdays.