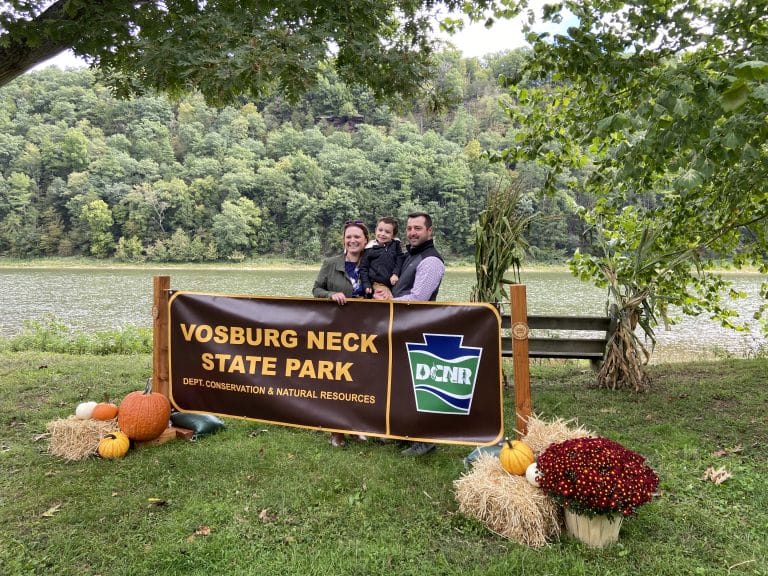 The process of opening the Howland Preserve to the public in 2006, maintaining and enhancing the property, and bringing it to its present status as Vosburg Neck State Park was anything but easy. Many entities and individuals forged lasting partnerships with the North Branch Land Trust (NBLT) to whom the property was bequeathed in 2003. And many people in attendance at the Sept. 29 dedication event had personal connections to the property. But no two people have poured as much of themselves into the project than Doug and Ali Wilson.

In 2013, the couple was paddling down the North Branch Susquehanna with river guide David Buck of Endless Mountains Outfitters when they and the rest of their sojourn crew pulled into a basic river access point at the Howland Preserve. It was the first time that the Wilsons had come off the river there, and the towering pines that lined a pathway to the old Howland homestead, the large barn and its companion farmhouse intrigued them.

But trash left behind by previous visitors was plentiful, and there were trees growing out of the eaves of the house, which showed other signs of neglect. “It was clear that things weren’t being taken care of,” Ali remembers. “It did not feel like it had been a happy place for years.”

Dave Buck explained to them that the Howland Preserve had been donated to the NBLT to be accessible to the public for recreation. Benefactor Ernie Howland and his closest friends had envisioned the 669 mostly forested acres as a public park.

“Dave said, ‘This place needs to become something, but we need someone young to help us out,’” Ali related. The NBLT board members were mostly older, they learned, and more inclined to administrative duties than the type of infrastructure and maintenance that the Preserve needed. “They had the vision but not the energy.”

The Wilsons had been married since 2009 and were both teaching in the Tunkhannock School District – Doug in graphics arts and animation at the high school and Ali as an arts instructor at the intermediate center. As if they weren’t busy enough, something about the property called to them, even though it also spoke of an enormous amount of work. A series of tenants had all but destroyed the interior of the house, and the barn was open to the elements.

“As a little girl, I rode by here going to Camp Lackawanna and saw how Marion (Howland – Ernie’s mother) took care of it and how beautiful it was,” said Ali. “We saw a glimpse of hope that it could become something that could be given back to the community.” As for the house, “We saw the potential of a park ranger living there – not necessarily us.”

While they continued to reside at Lake Winola, they began working on the Vosburg Neck property with the permission of the NBLT board. They formed the Friends of the Howland Preserve with a new Facebook page and began attracting others to the historic property. The Friends group officially became a non-profit in 2016 at the encouragement of the NBLT.

While enlisting friends who had the most experience with plumbing and carpentry to concentrate on the house, “the barn started going through some fluffing too,” Doug explained. For many years, lumber had been stored in the rafters, and it had to go. Not surprisingly, there were also layers of bird waste.

A close friend of the Wilsons was looking for someplace rustic where he and his fiancee could get married. As a trade off for using the barn, the friend and his friends conducted the first massive clean-out of the once stately building. As there was no seed money for the project, bartering work for use of the facilities became a common practice that is still in place today.

The Big Red Barn, as it is now affectionately called, proved popular as a venue but needed to be brought up to code. Maps and plans needed to be drawn up and submitted. A parking area was designated, and new doors were hung. The process was arduous but was completed in 2015 with support from organizations like the Endless Mountains Heritage Region (EMHR).

“Once we got boots on the ground down here, it became apparent that anything we could do would be our legacy work,” Doug stated, “Even if it was just five miles of mountain bike trails.”

Establishing and maintaining trails through the wetlands and up the hillside away from the river was another facet of the project that succeeded with outside support, including the Endless Mountains Visitors Bureau (EMVB), which provided funding for trail signage that matched that of neighboring Camp Lackawanna. The EMVB has also helped fund the promotion of the annual Rocking the River event with Room Tax grants. The focus of Rocking the River has shifted to the trails with a Howland Preserve Trail Race that has been spearheaded and co-planned by board member and avid runner, Ben Robinson.

High school students and Boy Scouts pitched in too. By 2016, the combined 1,000 acres of the camp and the Preserve boasted trails for hiking and mountain biking, and the Susquehanna River that wraps around the Vosburg Neck had been named a vital component of the National Parks Water Trail system.

Completed in 2018, the exterior of the house was painted a warm yellow hue and enough of the building had been restored that Doug and Ali moved in and became the property’s unofficial managers – literally a second full-time job for the couple. Mowing alone takes Doug eight hours per week. Trail maintenance is never ending, as are improvements to the barn, which has been host to numerous weddings, class reunions and public events that benefit the Howland Preserve.

The Wilsons credit former NBLT executive director Paul Lumia for suggesting to the state that the DCNR take over the property and make it a state park, leading to the first serious visit by state officials in 2013. They visited again after Sen. Lisa Baker pushed for a feasibility study as part of the 2016 state budget.

The fact that so much work had been done to structures and trails and that a very strong Friends group was already attracting new visitors to the property helped increased the viability of the proposal. But the cost, estimated at $12- to $13-million, brought the plans to a screeching halt.

“They were interested but didn’t have the funds,” said Ali. “A lot of balloons were deflated. Even some DCNR officials told us to let it go and that it was never going to happen.” But the Wilsons did not lose heart, as the Howland Preserve had become home for them and their son, Huxley. “I think we brought a good vibe to it,” Ali suggested.

Things began to change rapidly at the beginning of 2022. The value of natural gas began to skyrocket at the onset of the Russian invasion of the Ukraine, and updated court interpretations of the Oil & Gas Lease Fund started in 1955 made it clear that the money collected through the leasing of state lands for gas production should go right back to providing natural recreation for the citizens of Pennsylvania.

“Those funds are dedicated to conservation, recreation, flood control, and land acquisition,” DCNR deputy secretary John Norbeck explained. He, DCNR secretary Cindy Dunn and Baker began having regular meetings with Gov. Tom Wolf, who was on their side from the start.

Recently appointed NBLT executive director Ellen Ferretti called the Wilsons in February and put them on alert. As Ali recalled, “She said something like, “I need you to be aware that talks have started to make Howland Preserve a state park. It’s a long shot but it could happen.’” Subsequent communication with the NBLT and DCNR seemed promising.

“The stars aligned with the state budget,” Baker noted in her address to project partners and supporters at the dedication event. In fact, $56,000,000 was set aside as part of Wolf’s overall $700,000,000 environmental budget toward the creation of not just one, but three new state parks, the other two being in York and Chester counties.

“While I only started at North Branch Land Trust in mid-November of 2021, I have come to know Ali and Doug as hard working and dedicated advocates for the vitality and well-being of the natural resources and habitat so abundant at the Howland Preserve,” Ferretti offered. “It has been and continues to be our pleasure to work with them as we transition to being part of the magnificent PA DCNR state park system.”

The future of the Wilson’s and Vosburg State Park is uncertain, but they are no less excited about the elevated status of the Preserve. The State is continuing their lease for now to assist with the transformation as new Park Ranger Nick Sulzer and staff move into another large house on the property.

“Doug and Ali, along with the rest of the Friends of the Howland Preserve have been vital in providing information and history on the Howland Preserve. They will continue to be an integral part of the planning process,” Sulzer stated in an email. “DCNR values its partnerships with stakeholders and volunteer groups that provide the added support to keep our parks clean, safe, and enjoyable. After the transition of the park is complete, our hope is that the Friends group will continue to support the park and its visitors with their volunteer services.”

A site plan is underway with improvements to parking areas and the installation of restrooms at the top of the list. Trails will likely be expanded and the river access improved and possibly even paralleled with a motorized watercraft access point.

The changes are welcomed by the Wilsons as well. Most importantly, they will get a much-deserved break from many of their maintenance duties. “We’re definitely staying on to help with the transition and as Friends of Vosburg Neck State Park,” Ali maintained.

“Ali and Doug have been amazing stewards of the Howland Preserve,” said Jean Ruhf of the EMVB. “It’s wonderful to know that they will continue to be involved with the new State Park.”

Cain Chamberlin of the EMHR echoed her sentiments, calling the Wilson’s efforts “nothing short of awe-inspiring” and exemplary of what the EMHR looks for in heritage partners. “We look forward to continuing our partnership with them through educational programming, events and projects that will showcase and enhance the new park,” he stated.

That’s music to the Wilsons’ ears, the teachers in them looking forward to the addition of a ranger station, welcome center and interpretive displays. “We’re going to be able to focus on other projects,” said Doug. “They still want us to run events and educational programs.”

The park will start playing a larger role in the curriculum for area school students, who will be invited to participate in a variety of initiatives.

“We are so excited to be working with the state,” Ali added. “They have been so welcoming and willing to work with us.” 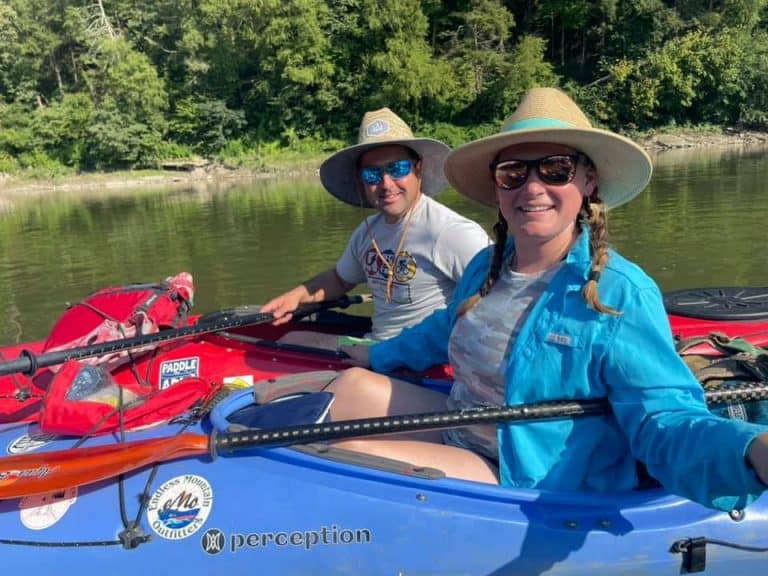 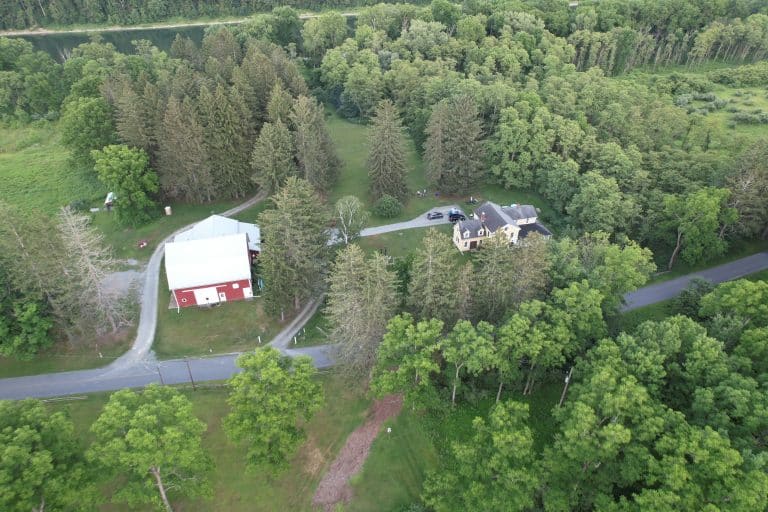 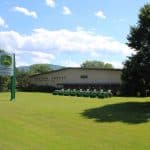