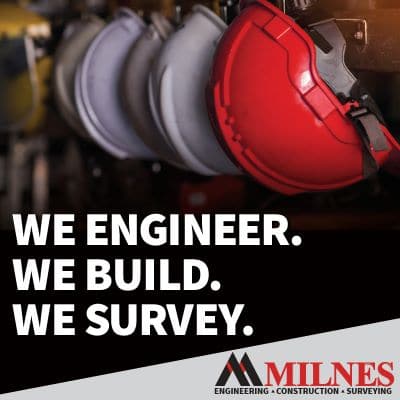 The Milnes family of Tunkhannock is celebrating the 65th anniversary of a namesake enterprise that was started by Stuart Milnes in 1956. Through the years, as additional family members and other professionals came on board, Milnes Engineering, Construction & Survey identified needs and added services that would eventually position them as the premier design-to-build firm in the region. They have embraced and enhanced emerging technologies to provide engineering, construction and surveying expertise for commercial and industrial projects large and small and near and far.

The range of their accomplishments is impressive, and their dedication toward building relationships with clients and subcontractors has garnered Milnes Engineering, Construction & Survey a reputation of being both disciplined and flexible to meet the demands of an ever-changing industrial landscape. In addition to recent examples of their work right here in Wyoming County, such as the Williams office building, Sherwood Chevrolet Dealership and D&C Fuel Sales in Tunkhannock, Milnes has left its mark on projects from coast to coast.

Stuart Milnes was living in Rushville, Susquehanna County, when he enrolled at Penn State University to earn a degree in Forestry in 1933. He went to work for the U.S. Forestry Service and was tapped to head up an emergency rubber project for civilian World War II efforts. Stuart’s job was to secure timber for the armed forces and, through the course of this commission, he sharpened his surveying skills.

The Forest Service recognized Stuart’s value and tried to retain him after the war ended, offering him a job in Alaska. By then, he had started a family and didn’t want to work so far away, first taking on some private forestry work in Michigan. According to his son, Paul, Stuart was a natural as a designer, overseeing the construction of roads and bridges in a national forest there.

Stuart returned to Pennsylvania, however, in 1947, bought a 200-acre farm in LeRaysville and ran a sawmill. There was a lack of qualified surveyors in the region, and people began requesting his services. To make it official, Stuart successfully obtained a license as a surveyor through the state. He told newspaper reporter Phillip Lieberman in 1982 that attorneys in Tunkhannock were feeding him so much work, he decided to turn over the sawmill to his sons and shift to a career as a surveyor.

“By the late 1950s, I decided I had so much work that I’d better set up office space,” said Stuart, who rented a room at the back of the office of attorney John Morgan, one of many for whom he would conduct land surveys.

This was an industrial heyday for Wyoming County, and Stuart was called upon to assist Procter & Gamble with finding a suitable site for expansion into the area. Stuart helped them design the layout and surveyed the tract in Mehoopany Township. The scope of the P&G project encouraged him to seek his engineering license.

“He had the working experience to take the professional engineering exam orally,” Paul told us. “That was very rare at the time and probably impossible today.”

At the same time, Stuart’s son, Tom, was graduating from Penn State with a dual degree in civil and sanitary engineering. He worked briefly at Roy Weston Engineering (now Weston Solutions) in Philadelphia before returning to graduate school to get a Doctorate degree at Cornell University that included research in waste treatment, high-powered sanitary engineering, and paper mill waste. He returned to Philadelphia to work for Catalytic, doing waste treatment for the petroleum industry, employing a relatively new activated sludge process.

“Tom was not happy working in Philadelphia, so he came back to work with dad and started Milnes Engineering,” Paul related. Father and son handled the design work, and Ron Hobbs was hired to maintain the surveying side of the business. As the number of both clients and staff continued to grow, Milnes purchased a house on Bridge Street in Tunkhannock and renovated it to serve as the business’s new headquarters. New employees included Ned Slocum and Dave Shoemaker, who handled surveying drafting and engineering work, respectively. (The current headquarters on Frear Hill Road were constructed in 1995.)

After being honorably discharged from military service, Ned began doing some survey work for Stuart and slowly transitioned into the engineering side of the company by 1974, having secured his PLS and PE licenses. Stuart’s son, Gene, retired from the Air Force and came into the company as an accountant, utilizing early computers for the first time. Paul, who was a licensed civil engineer, left his job at the PA DEP (then DER) and joined the company in 1975. In 1976, Milnes Construction was incorporated with Stuart and Tom at its helm, effectively making Milnes Companies a one-stop-shop for all commercial general construction needs. Stuart retired in 1980.

Tom’s son, George, started with the company as a teenager, cutting brush for the surveyors and working his way up to his current position as General Superintendent, garnering a degree in Construction Technology from Williamsport Area Community College (now Penn Tech) along the way.

Tom’s daughter, Karen, joined the staff in 2001 as an administrative assistant for the construction company and eventually moved into her current role as Chief Financial Officer. She’d previously worked for PG Energy and Pennsylvania Gas & Water, which became UGI. As administrators and crew members alike mark the company’s anniversary this year and look back on six and a half decades of growth, they often refer to long-time employees who felt more like family over the years as legacy employees. “We have had so many employees that dedicated all or part of their careers to Milnes,” said Karen, who believes that the companies have employed more than 500 people since their inception.

The size of the staff has fluctuated from 10 to 50 over time depending on how much work was available and how many crew members were needed for a specific job. Surveying, for example, has changed drastically, according to Dave, as more electronic devices are used in the field.

“A survey crew used to involve up to five people,” Paul recalled. “It’s all done by one person now,” Dave explained. “In the old days, you had to come back to the office and give notes to the draftsmen. Now, you enter all the data in the field and it goes into the system.

Now, surveyors have the ability through computers to do their own maps.” “You have to keep in step with that or, otherwise, you’re lost,” Paul remarked.

Never losing their way but working instead as a team to keep an eye on the future is what brought Milnes Companies to the 65-year mark.

George and Karen told us that they feel very fortunate to be the third generation of family members to run the companies. “Our father, Tom, uncles Paul and Gene, and many dedicated employees spent their careers building this company and creating a legacy,” said Karen. “It is our goal to carry on this legacy by maintaining the same values, integrity and level of professionalism that got us where we are today.” 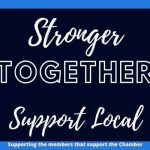 Next:
Why Shop Local?